Jack and I joined Coast2Coast divers at Poole to go on Rocket yesterday to play on The Reindeer/Spyro. The day was billed as, do the dive, then head in towards the shore and watch the Bournemouth Air Show whilst having a BBQ on board. Life doesn't always go as planned, it was a fair way out, just off the IOW the unfortunate thing was we got down to the wreck and the viz was pants (with a capital P), after about 5 minutes I'd lost Jack, the other mistake I made was taking the Hugyfot housing and lights I'd have been far better off with just the GoPro over the light. After half an hour of poodling about in the dark and not seeing much I headed north. I digress, the dive was poop, the weather had closed in, the air show was cancelled, the cheeseburgers were awesome, our new dive buddies great and the overall experience brill and I would definitely go with them again if they'd have us.

Here's a bit of video: 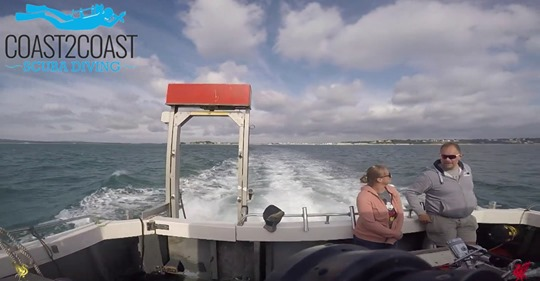